Last Chance: Either Stand with Evil or Renounce It!

The national election of 2016 is more than a year away, 457 days to be exact. Already establishment media outlets are filling the air with the unremitting mind-numbing noise.


Last Thursday night, ten carefully selected Republican Sock Puppets were on display as the Fox News channel aired what was billed as the first nationally-televised debate among GOP Presidential candidates. Matt Drudge reports that a record 24 million people tuned in to watch, lured by the opportunity to see billionaire reality-TV star and casino magnate Donald Trump in action. The heavily-promoted debate had all the excitement, substance and authenticity of a World Wrestling Federation championship match. Not to be outdone, the first nationally-televised Democrat Sock Puppet debate will be held on October 13th in a yet-to-be-disclosed Nevada city and will be carried by CNN.


None of this Kabuki Theater matters in the slightest. The "Two Party System" is a complete fraud, trotted out every four years to mollify us unsuspecting rubes. There is really only one political party and it is the Washington Party. It makes not the slightest difference whether the Democrat wing or the Republican wing of the Washington Party "wins" in 2016. The same criminal cartel will remain in power. Step-by-step, our oligarch masters will continue to:

Recent pubic opinion polls (see the graphs which follow) confirm the American people's loss of confidence in political institutions, political parties, and the establishment media. Donald Trump's standing in presidential candidate popularity polls is a direct reflection of that confidence loss. "The Donald" leads the pack precisely because he is not seen to be a politician.

Millions of Americans feel helpless as the oligarch's evil agenda is brutally implemented by elected officials in defiance of the Constitution and the people's wishes. Motivated by a sense of civic responsibility, many cast their ballots for "the lesser of two evils" every four years, hoping that this time things will change. Of course, their hopes are futile because, by federal law, the Republican and Democrat parties are in total control of ballot access. No candidate for national office can appear on the ballot without their approval. Both Republican and Democrat national parties are wholly owned subsidiaries of the Welfare/Warfare State, two heads of a single monstrous body. Both are committed to the same evil agenda and both serve the same master, That master is not the American people.

There is only one moral option: Refuse to participate! Don't vote for any candidates for national office. Mark that section of your ballot "NOTA" (for "none of the above").

It doesn't matter how much you despise "the other guy". Do not let yourself be rope-a-doped again. Even when your "lesser of two evils" candidate wins, you still lose. History and personal experience prove that our past participation, no matter how passionate, has done nothing to slow the advance of the oligarch's agenda. When we cast our ballot for candidates who are committed to that agenda, we facilitate evil and become complicit in it. Conversely, our deliberate informed refusal to vote for such candidates serves as an announcement that we will no longer participate in a corrupt and rigged system. We are withdrawing our grant of moral authority to act in our name, a step that should be of paramount importance to Christians and to all who believe in God's goodness and oppose evil.

Renouncing Evil as a Nonviolent Act of Revolution

Even the most powerful totalitarian dictatorships must have tacit support from the people in order to stay in power. Authoritarian regimes almost never fall as a direct result of armed revolutionary action by opposition groups. Instead, although some violence may occur, they fall when the people withdraw their grant of moral authority to govern.

I happened to be watching television in December of 1989 when the Romanian dictator, Nicolae Ceausescu, appeared on the balcony of his Presidential Palace in Bucharest to harangue the furious revolutionary mob gathered in the square below. I will never forget the look of abject terror that flashed across his face at the moment he realized with fatal certainty that his regime was finished. He fled Bucharest only to be captured and executed by firing squad on Christmas day after a drum head trial. Although his overthrow was the most violent revolutionary act to occur during the collapse of the Warsaw Pact state governments, it was the loss of his government's moral authority, not armed force, that ultimately brought him down, To further make the point, the Soviet Union was never more powerful in terms of military firepower than when it finally collapsed with a whimper in 1991.

In June of last year, the Gallup polling organization reported that Americans' confidence in all three branches of the U.S. government has fallen, reaching record lows for the Supreme Court (30%) and Congress (7%), and a six-year low for the presidency (29%). The presidency had the largest drop of the three branches this year, down seven percentage points from its previous rating of 36%. If this level of antipathy isn't ringing alarm bells throughout the halls of power in Washington, it should be. These are pre-revolutionary numbers. 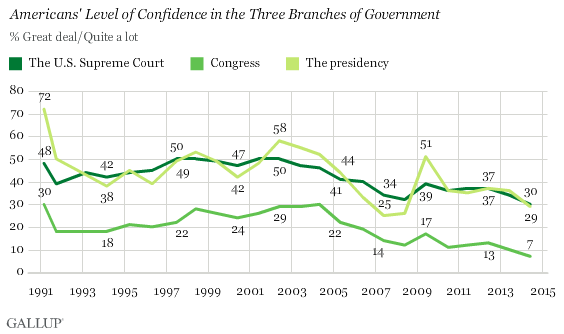 As this is written, the Internet is abuzz with widespread anxiety. Millions of people are sensing impending disaster. the exact nature of which is a matter of much conjecture. Theories about the nature of the feared disaster include:
There may well be other theories that I have missed but, in any case, much of the anxiety is a direct result of inexplicable and unusual federal behavior, real and perceived.

The trends shown on the above graph and their downward trajectory are very likely the reasons that the federal government has been stocking up on ammunition and positioning military forces around the country. Although it is true that the United States government possesses the most powerful military force on the planet and owns incredible killing machines, it is also true that the people upon whom it must rely to pull the triggers have parents, siblings, and children who will be in harm's way should Washington attempt to impose its will on the population by force of arms. Ceausescu learned the hard way that familial ties trump military discipline when the chips are really down.

It is my hope that this post goes viral and is widely read. Should it come to pass that a national election is actually held on November 8 2016, perhaps the refusal of enough of us to participate in that farce will cause the oligarchs to experience their own personal Ceausescu-like "balcony moment" and head for the hills leaving "we, the people" to sort out our own affairs. Of course, in the event any of the worst-case disaster speculations come to pass, Washington may no longer matter but at the very least the condition of our souls will surely have been improved by our noble intentions