Something big is about to happen.

The governing establishment sees it coming, is terrified of the people, and desperately wants them disarmed. It really isn't hard to understand why that would be the case. After all, if your power and wealth depended upon lying to the people, abolishing their freedom, destroying their livelihoods, and sending their sons and daughters off to die in pointless wars, would you want them to have weapons?

The American people are buying guns and ammunition in record numbers in absolute defiance of a massive and coordinated gun control propaganda campaign. According to The New York Times, gun sales haven’t just been spiking after the San Bernardino terror attack. More Americans had their backgrounds checked to buy guns on Black Friday (the day after Thanksgiving) than any other single day on record. Some 185,345 had their backgrounds checked on that day alone, a 5 percent increase from the year before. Gun sales are on a trajectory to set an all time national annual record.

The people are increasingly angry and fed up. In June of last year, the Gallup polling organization reported that Americans' confidence in all three branches of the U.S. government had fallen, reaching record lows for the Supreme Court (30%) and Congress (7%), and a six-year low for the presidency (29%). The presidency had the largest drop of the three branches, down seven points from its previous rating of 36%.  Then, just last month, a Pew Research Center poll found that 27 percent of registered voters think of government as an enemy, up 8 points since 1996. If those poll results aren't ringing alarm bells throughout the halls of power in Washington, they should be. These are pre-revolutionary numbers.

Joseph Goebbels, Hitler's Minister of Propaganda once said, "Repeat a lie a thousand times and it becomes the truth." When it comes to advancing the gun control agenda, the establishment is a one-trick pony that follows Goebbels advice to the letter: It launches a blizzard of lies and then depends upon its reliably-controlled "news" and entertainment media to disseminate them. Here are some of the most recent examples.


"There is a gun for roughly every man, woman and child in America. So how can you, with a straight face, make the argument that more guns will make us safer?" President Barack Obama, October 1, 2015

"Can President Obama Actually DO Anything About the Epidemic of Gun Violence?" Daily KOS

“The San Bernardino Shooting Is The Second Mass Shooting Today and the 355th This Year.” Washington Post

All of these, except for the last, amount to fairly standard "gun control" distortions. All of them suffer from the same problems and are easily discredited by real data as will be seen shortly.

With respect to the Washington Post headline, these deliberately misleading figures come from a ferociously anti-gun web site called ShootingTracker.com. The site conflates "mass shootings" with "mass killings". Included in the count are gang shootings, robberies and other violent outbreaks that do not result in fatalities. It is ironic that most of these "mass shootings" are suffered by the unfortunate residents of Chicago (the President's home town) and other urban locations which have been controlled by anti-gun Democrat administrations f,or decades. Apparently, "Black Lives Do Not Matter", when the mayor is a Democrat.

The anti-gun Left is and has always been completely out of touch with reality. Consider (1) its continued focus on "gun violence" instead of overall violence; (2) its insistence that semi-automatic rifles are "assault weapons";  (3) its continued claim that the U.S. has an unusually high murder rate; and (4) its repeated assertion that the widespread private ownership of firearms is responsible for the murder rate. The facts are readily available to anyone who cares to look for them and they still are not being accurately reported by the establishment media.

The U.S. homicide rate per 100,000 population has been dropping since 1993 and is now at its lowest level since 1968! Exceptions are cities which have the tightest restrictions on the private ownership of firearms such as Obama's Chicago.  (See FBI-Uniform Crime Reports.)

The U.S. homicide rate (murders per 100,000 population) ranks 108th of the 207 countries for which data are reported according to the UN Office on Drugs and Crime’s most recent report (see http://www.unodc.org/). All countries reporting higher murder rates than the U.S. require firearm registration and have very restrictive (virtually prohibitive) licensing requirements. Bear in mind that these data are from “the most recent year reported” and are subject to change as new information is added.

Gun ownership data comes from http://www.gunpolicy.org/. Although the U.S. leads the world in per capita ownership of firearms, more than one-half of the countries in the world have a higher murder rate than the United States, many of them much higher. If private firearms ownership “causes” murder, the U.S. murder rate should be the highest by far. It’s not even close.

According to the U.S. Department of Justice, the U.S. reported 14,196 murders in 2013, continuing a decline that has been occurring since 1993. To put these data in perspective, had the U.S. experienced El Salvador’s homicide rate, there would have been 218,039 murders and yet private firearms ownership is 15.3 times that of El Salvador! Greenland’s rate applied to our population would have resulted in 60,496 murders. In the face of these data, it is impossible to honestly believe that there is any meaningful correlation between private gun ownership and national murder rates.

It is also absolutely clear that the propensity to commit murder (and the probability of being murdered) is not equally distributed among the U.S. population. Black Americans kill and are killed at eight times the rate observed in the rest of the population. Again, see FBI-Uniform Crime Reports. The effect of this unequal distribution on the national murder rate is enormous. When the black murder rate is “normalized” to those levels observed in the rest of the U.S. population, the U.S. murder rate is cut virtually in half and falls close to rates seen in Western Europe and Canada. These data do not support the idea that there exists any causal relationship between national murder rates and private firearm ownership. These data make the Washington political establishment very nervous. The attack on the Second Amendment serves the purpose of diverting attention away from this undeniable but very Politically Incorrect fact, a diversion that may well be deliberate.

The mass killing at San Bernardino appear to be the result of a terrorist attack. The mass killings at Columbine, Virginia Tech, Aurora, Sandy Hook and Roseburg are of a very different type and the perpetrators have very different motivations although every single one of them took place in a "gun free zone", assuring the perpetrators of an unlimited supply of defenseless victims. Unlike the street killings that account for most U.S. murders in which black Americans are disproportionately both victims and killers, in mass killing incidents the killers tend to be White or Asian male mental patients. There are reasons for that difference which the political establishment absolutely refuses to consider.

Prior to 1968, there were virtually no mass killings in the United States and it was possible for anyone to purchase any legal fire arm with no background check. Guns could be mail-ordered from catalog stores such as Sears Roebuck, Montgomery Wards, JC Penny, or Spiegels and they would be delivered by the U.S. Postal Service. Then, beginning in the decade of the 1970s,  the U.S. experienced a dramatic increase in the number of mass killings. Two factors accompanied that increase and both warrant exploration.

Throughout the 1970s, mental health care reform emptied out the state mental hospitals and made it much more difficult to have dangerous mental patients involuntarily committed for treatment.

Then, in 1987, the “anti-depressant” PROZAC was approved and widely prescribed followed by ZOLOFT, PAXIL and other SSRI drugs. Known side effects include suicide ideation and violent behavior. Most—if not all—of the mass killers from 1980 on were taking one or more of these drugs.

There is simply no demonstrable causal relationship between the private ownership of firearms and murder. In fact, despite an explosion in new gun sales, the trends shown on the graph below have actually accelerated. 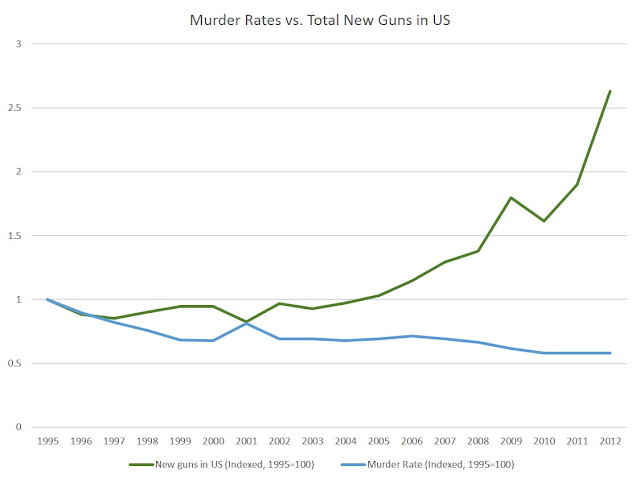